We all love animals, right? Having a pet is one of the best things you can do, and means you’ve always got some company. Some people are happy with cats or dogs, but others like to go for something a bit more interesting. I am, in fact, one of those people. I own a Moluccan Cockatoo, also called a Salmon-crested Cockatoo, whose name is Tango. The Moluccan Cockatoo is currently an endangered species, and so I’ve written this post to bring some attention to this amazing and beautiful species. 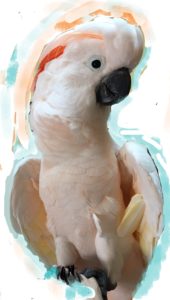 Tango is my world, and I’ve had him since he was a chick. I’m a mother to him, and he has been known to act like a spoilt child on occasions. He doesn’t understand the word “no.” In fact, he seems to think it means “I’ll try again in a minute.” He’s completely potty trained, and even has a car seat so he can join me on my trips to art fairs across the country.

It’s safe to say Tango is my muse, and the source of all my creative energy. He personality inspires my designs, and I personally think it’s the source of my style too. And I even let Tango have final say on some of my ideas (although I usually ignore his opinion). Tango recently turned 20, so I thought I’d use the occasion to tell you more about his species.

The Moluccan Cockatoo originally comes from a region in eastern Indonesia, called the Seram archipelago. Just as with most island communities (Galapagos for example) their isolation from the mainland led to a number of unique species that aren’t found anywhere else in the world. The Seram region is mostly mountains, although it has a massively varied terrain because of its location on tectonic plate lines. The islands are covered in dense rainforest, mostly untouched by humans. This makes it the perfect home for birds.

The Salmon-crested Cockatoo is listed as a vulnerable species in the wild. This means that without conscious improvement of their habitat, and without scheduled breeding plans, the species will become extinct. To help with this, the Indonesian government has set up a National Park on Seram, which gives the birds a protected environment to live in. Just as with many other species, the Moluccan Cockatoo has been victim to poaching over the years, and so the protection zone is designed to stop that.

Like many other bird species, Moluccan Cockatoos can live a very long time. In captivity, they can live for over 30 years, although this could be more in the wild. This means they’re not for the faint-hearted, and you need to be committed to spending enough time with them every day.

They are mostly white, with a definite pinky-peach glow to their feathers. They’re quite incredible to look at when the light shines on them because they just get even pinker. As an artist this gives me so much inspiration. Just like with other cockatoos, they have a crest that comes up when they’re excited, all of which is bright red or orange. This is where their name comes from, and it’s really a sight to behold. How they manage to hide those bright feathers under their normal white ones still amazes me!

Moluccans are one of the larger species of cockatoo, growing to an average size of 46-52cm, and an average weight of 850g. Just as with many other species, the females are slightly larger than the males, and the size difference can be quite noticeable sometimes. They mate once a year, and form lifelong bonds with their partners. If their partner dies or goes missing, they can become incredibly depressed and won’t mate again. However, if they already have a chick together, they will let another cockatoo help them raise it.

They are often referred to as Velcro Birds because of their intense attachment to their humans. If it was possible, Tango would sit on my shoulder all day every day, and he can get rather angry when he’s not allowed. That said, they love to cuddle and enjoy being showered with attention, which isn’t too bad. You just have to make sure you’re willing to give them the amount of attention they want; otherwise they can get a bit stroppy. Tango is a sweetheart really though, and he’s got plenty of toys to play with while I’m busy creating wearable art.

Just as with most other pet birds, Moluccan Cockatoos love to talk. They have one of the loudest calls in the bird world, and can easily win a shouting match. Sometimes they enjoy screaming for no reason, although I put it down to their playful personality. They can even mimic some words, but not as much as a parrot. Moluccan Cockatoos are more about love and affection rather than having a nice chat.

Moluccan Cockatoos – how to help

Since Moluccan Cockatoos were added to the Endangered Species List it’s become almost impossible to get them as pets. I’ve had Tango for 20 years, and over that time we’ve developed a very close bond. However, if you’re thinking of getting a pet bird, choose a species that isn’t endangered. Many species of parrot and cockatoo are widely available from specialist pet shops, and make great pets.

If you really want to do something to help, consider donating to a charity that’s working to prevent the species’ extinction. The Indonesian Parrot Project works to protect endangered bird species native to Indonesia, and they’re doing great work in the area. You could also think about donating to your local zoo, or another animal conservation charity. The most helpful thing we can do is assist them in doing their job.

I love Tango, and I wouldn’t change him for the world. He inspires me every day to create beautiful art, and I constantly look to him for motivation. If you ever see us out together, make sure you say hi!